04 August 2019 (Siler City, NC)—The Becoming One Community Enrichment and Diversity Center hosted their second annual awards banquet in Pittsboro, North Carolina at the Chatham County Agricultural and Conference Center. The evening was marked by a keynote address from Becoming One Director, Reverend Doctor Albert Reddick, who shared his inspirational message related to the power of a diverse community and nation. Drawing from the legacies of Senator Bobby Kennedy and Dr. Martin Luther King, both of whom were assassinated in 1968, Reverend Reddick noted that these icons of social justice fought to overcome the deep racial divide of the 1960s and unite our nation; they even gave their lives for it.

“Martin was a dreamer,” Reddick said. “And his dream of ‘little black boys and black girls being able to join hands with little white boys and white girls as sisters and brothers has indeed come true. How many here tonight know a mixed-race couple,” Reddick asked. “How many here tonight have one in your own family?” pointing the changing cultural and community fabric of our nation; one where diversity and tolerance is accepted, rather than the exception. 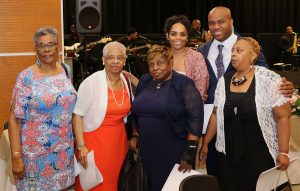 In addition to the keynote, the Becoming One Community Enrichment Awards were announced and given out to recipients. This year’s awardees were recognized for their service in the Chatham County community, whether through their businesses or advocacy for their neighbors in need. Those recognized for their outstanding service and community enrichment were:

All these awardees were presented with the traditional Becoming One plaque on which sits a mosaic that is crafted from ceramic and porcelain pieces that have been reclaimed, set back together, and organized into a pattern of endless unity, highly symbolic of the mission of the Becoming One Community Center in Siler City, North Carolina. 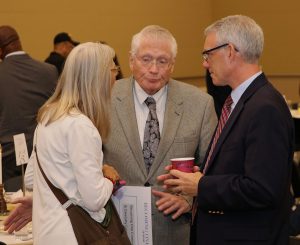 The recipients each provided their personal thanks to the Becoming One Community Center and were joined in the celebration by their families, co-workers, and friends.

Music was provided by Elements of Jazz & Friends. The evening was also highlighted by the lovely singing of “Change my Heart, O God” and the closing song, “Bind Us Together” performed by Mrs. Sandra Reddick.

The Becoming One Awards